For this and details of other workshops, visit the booking page. This one is strictly seasonal so if you don't see it on the workshop list, sign up to receive notification of workshop updates

It was the first time that using meat in a workshop with My Green Garden had happened. As it is, even though I am familiar with the process, I called on the expertise of Chef Michael Chapman, a personal friend and Italo-phile, to actually run the workshop. Michael is married to Leah who has Italian heritage and he has taken on the traditions of the Italian migrants to Australia wholeheartedly. Michael and Leah and extended family do the sauce (tomato passata) every year and make the salami and cured meats as well. (Michael is keen to get an invitation to visit any other family who might 'do the pig' so that he can see, first-hand, how all the different parts of the animal are used for cooking, preserving, lard etc.)

So I dutifully went off the buy the various components for the day, namely the meat and the bits and pieces we would need for our shared lunch, but it was Michael who did the bulk of the preparation as he has all the equipment.

Done traditionally, the cutting up of the meat and the preparing of it for the salume (cured meats in general) is done outside or in the garage. The reason it is done in winter is to stop the meat going off in the heat before it cures (or preserves) properly, so doing it outside or in the garage requires some fortification and fortitude of the spirit - by spirits usually! The wine, the brandy, the grappa, or whatever else is needed to keep you warm is consumed liberally.

Instead, for the sakes of our health, we stayed inside but didn't turn the heaters on at all so that the room would be kept as cool as possible. It was good planning because the outside temperature was a very cool 4 deg C!

The workshop was fully booked which meant that 10 people had enrolled and soon enough, strangers became friendly as happens in all of my hands-on workshops. Still, the laughter and the giggles that tend to happen when seeing sausages get extruded were stifled at first. We tried to make ourselves appear more mature than what we were thinking. However, soon enough the jokes started and the giggles were shared out loud. It's that sort of a process, with lots of innuendo!!

Sausages were made first with a couple of varieties. The difference with these and shop bought snags is that we could see what went into them. No mystery-bags here! All natural, no added gluten, artificial flavour enhancers or anything else that came with a number instead of a name. These were put aside in the fridge to be cooked later on the BBQ for our lunch.

The salami for preserving had to be a bit more measured. The ratio of meat to fat to salt is pretty critical and can make the difference between being fit to eat or not. The mixing had to be very thorough and it was all hands on deck - or in the meat! - to make sure it was of the right consistency before filling the casings. Tastings, washed down with some wine generously supplied by Andrew and Tara from their winery "South by 37" in Kangaroo Ground, were enjoyed as we checked for flavouring, such as spiciness.

Everybody got the opportunity to use the equipment to fill casings and tie them up, ready to be taken by Chef Chappie to cure in his 'cantina', or storage area under his house, where the temperature remains cool and it is airy without being draughty. Once they are cured, they will be vacuum-sealed to stop them drying out too much and then distributed to the participants.

After all the activity, it was a very relaxed and laughter-filled lunch, eating the sausages we had made, salads to balance all the meat and plenty of wine to wash it all down. Strangers to our home had become family, as happens when we do our preserving classes - the traditional way! 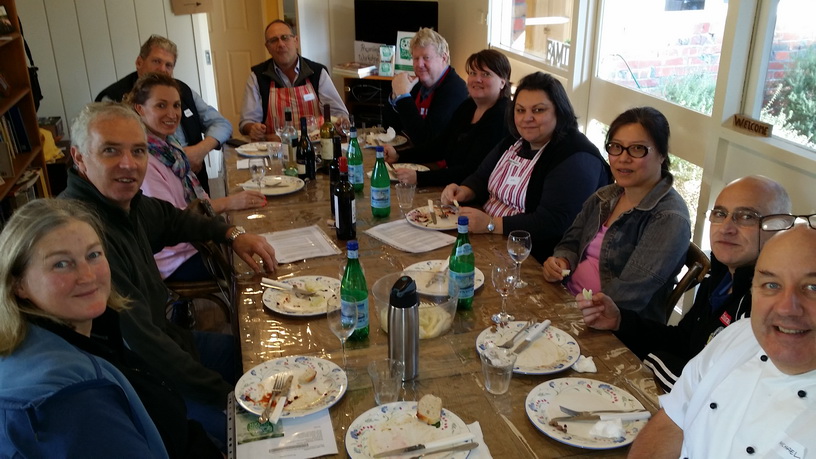 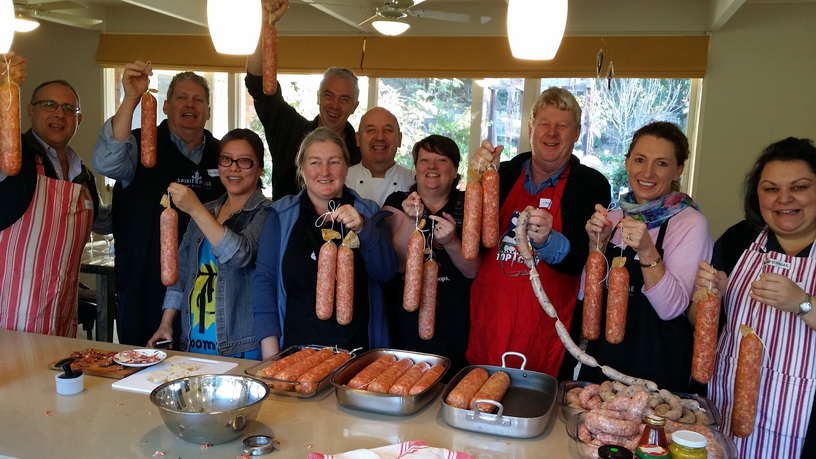 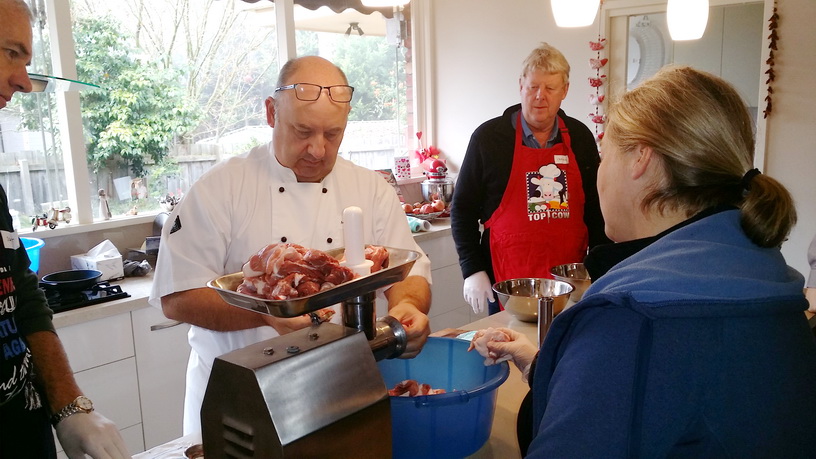 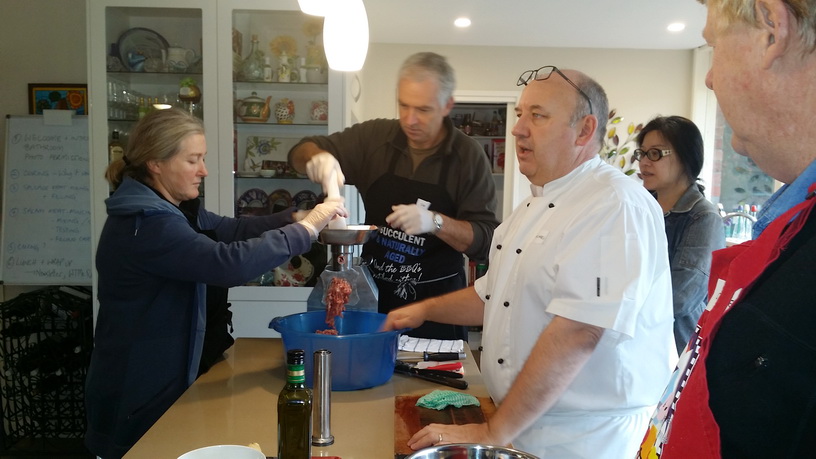 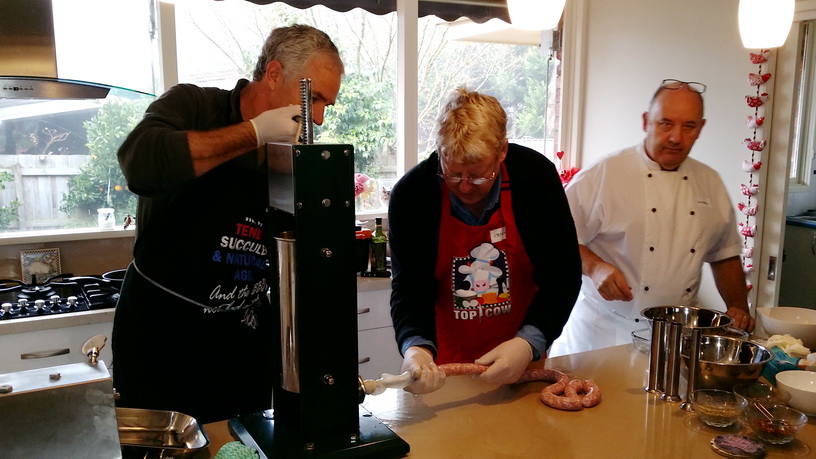 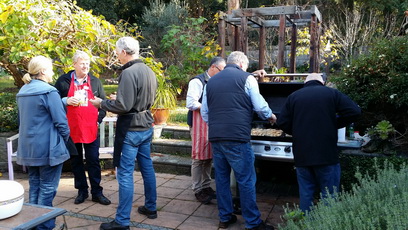 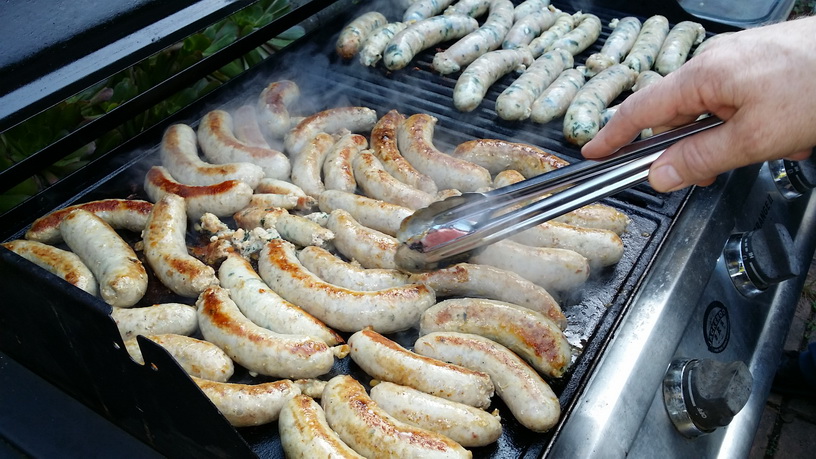 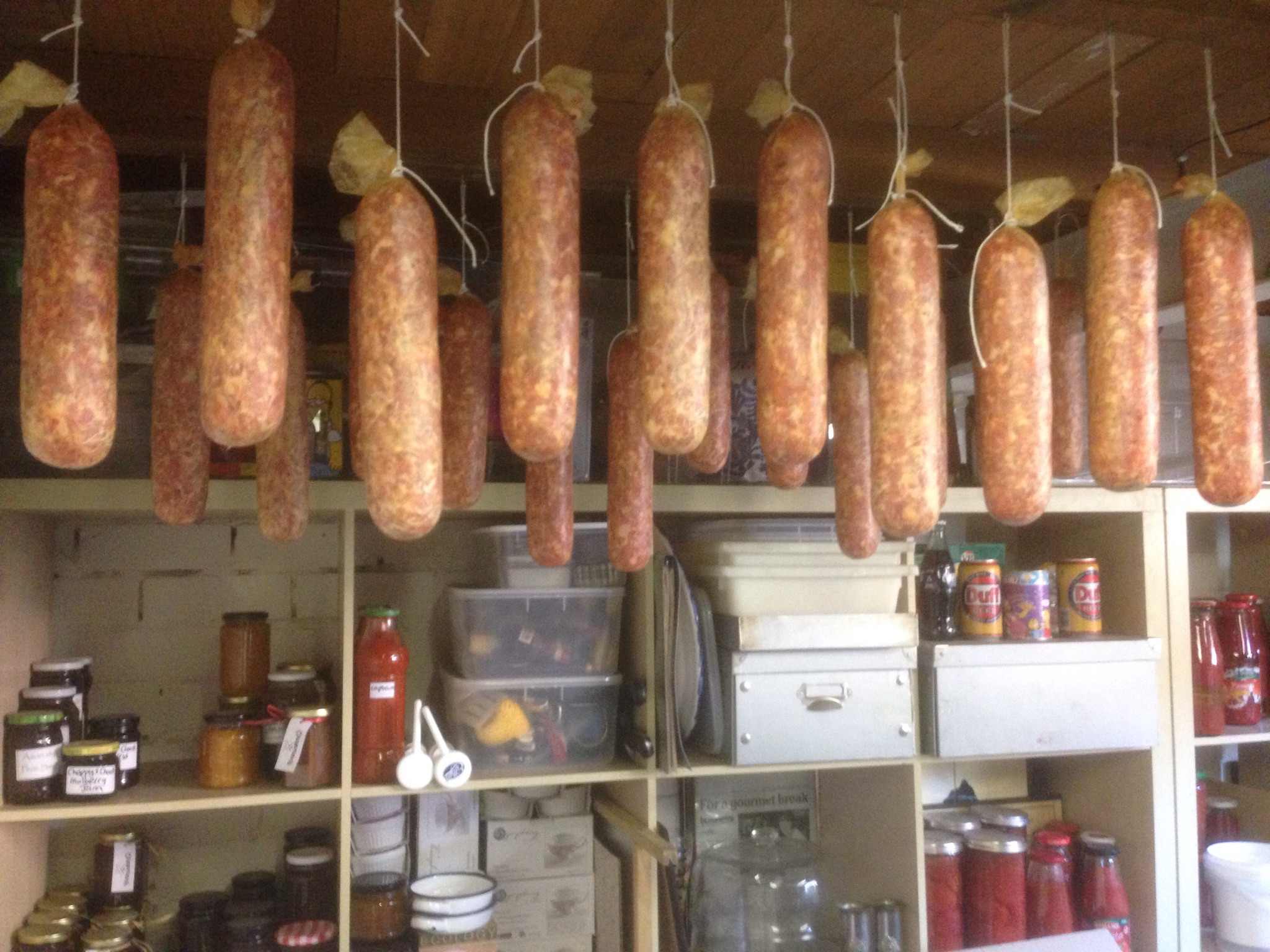