Backyard Chooks - Why Not? 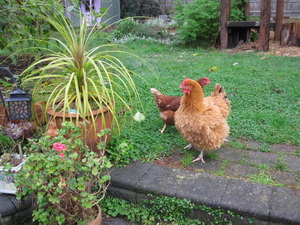 Sceptics say that you can’t have a garden with chooks. They dig up plants, they make a mess of mulch, they leave droppings around, but this could be said of many pets. My experience is that a garden just isn’t one without them. To see them strutting around the lawn, or lying down and stretching out their wings to soak up the sunshine brings colour and movement to a backyard like nothing else. Even though many of the varieties don’t necessarily make cuddly pets, hens have a lot more to offer than just their good looks and amusing antics. They do know whose hand it is that feeds them.

And after all that,

The sceptics say that you can’t have a garden with chooks. It’s true in a sense if you let the chickens have “free range” wherever they like. They do create dustbowls in areas where there is bare soil, because dust bathing is their way of keeping themselves clean. But they won’t do that if there is something already growing well in that position. They can create havoc amongst young plants, especially vegetable seedlings, but there are ways of guarding against that. At my place, there are certain times of the year when they can only stay in their fenced off outside run, rather than through my vegie patch. Once the seedlings are strong enough to look after themselves, the chooks aren’t interested. Beds that contain tender plants like lettuce are guarded with some low edging, probably to the height of the chook. This doesn’t have to be permanent: some bamboo stakes through some wire mesh is ample. This has also been done around my fruit trees because they love scrounging through mulch to see what delectable insects they might find.

For those who are very precious about their garden and still want to keep chooks, there is a way, which is still infinitely more humane than battery conditions. Short of attaching an outside run to their permanent shelter (the chook shed), the henhouse can be run on a “deep litter” system. Even if you only have enough space for a shed, this is still large enough to house half a dozen chooks. This would contain a deep amount of dry bedding, such as a combination of wood shavings, straw, shredded newspaper etc etc to soak up the manure and provide some place for them to scratch. This might also be the solution if you are concerned about integrating them with other pets, such as dogs. For more detail on the deep litter system, there are references below.

Foxes and vermin can be a problem. The number of foxes in our urban and suburban areas is astounding, and a fresh chook makes a tasty meal. The chook shed must be strong enough to withstand a fox attack, who prowl about at night. Once we were alerted to a fox, as brazen as can be, on a late summer’s afternoon in our backyard. The chooks were squawking madly and running about in all directions which bamboozled the normally wily fox, until we came out to see what all the commotion was about. He got away, but not with his evening’s meal. That’s why foxes normally visit only overnight, because a chook, once asleep, is easy prey – unless securely locked up by dusk. Other vermin include the rat and mouse variety, which we keep under control by blocking up any small holes through which they can enter and not leaving food and grain lying about.  They don’t bother the chooks but they bother me!

Those who keep chooks think they’re wonderful. There’s a bit of work involved, as with all pets, but the rewards for your garden, your stomach and for the environment make the effort worth it. For more details, there are many good website references, or books such as Jackie French’s “Chook Book” or Alanna Moore’s “Backyard Poultry”; available at good book stores or at Bulleen Art & Garden.